After doing a lot of research I’d come to the conclusion I wanted a quadcopter that was small enough to be fun and fast, but large enough to carry an HD camera for long enough to get some nice footage. I’d watched a bunch of videos by juz70 like this:

and wanted that same out-of-body serene feeling. The Lumenier frames seemed to be really well reviewed with people doing video so I decided to go with them. There’s the QAV250, QAV400 and QAV500 to choose from and the 400 seemed the most appropriate to accomplish my three goals: flippable fun, decent flight times and stable for the camera.

With that decided, I went about building a parts list. This was actually pretty hard since I found I had to go to a lot of different places to find the info I needed but thankfully, I came across this thread where Rob215 was building almost exactly the type of quad I was looking for. He kindly put a parts list in that thread and that got me a really good start.

I certainly didn’t get everything right first time and had to order (and wait… thanks incredibly slow Vancouver mail ;-)) on a few occasions. Here’s the list for the frame only (I’ll detail radio and FPV kit in another post).

To build one of these, you’ll need some tools. I think so far I’ve used:

Following the QAV400 Build Manual only got me up to putting on the arms before it went off the rails. As mentioned above, the G10 arms are different and will require you to use longer bolts and spin on the nuts so you can work without them falling off all the time (wish I’d thought of that at the time). 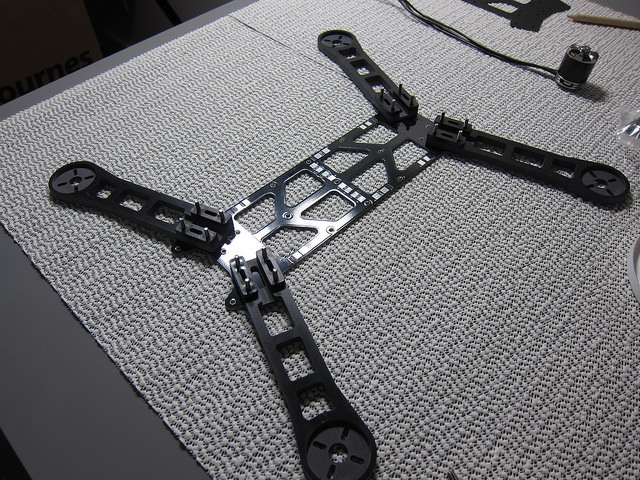 Once the arms were on, I actually found it useful to attach the motors so that I could stand the frame (upside down) on them. It gave some clearance so that I didn’t melt my desk when soldering. Don’t go crazy tightening the screws into the motor, let the Loctite do its job and don’t risk stripping the threads (this goes for all of the assembly). 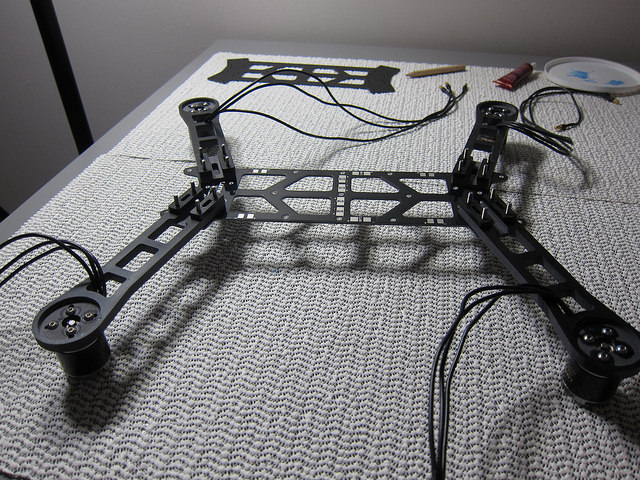 I’m not sure since I don’t have aluminium arms to compare with, but I think the G10 arms are thinner at the frame end and as such come with spacers. You should be able to see these in the pictures. Don’t forget to put those on…

I learnt a lot about soldering building this quad. My advice: go watch a lot of YouTube video on soldering and practise on something you don’t care about first. I made some nasty mistakes that required a lot of cleanup and could have risked the quad in flight if I hadn’t noticed them (cold solder joints and so on). Make sure your pads are nicely tinned before trying to attach any cables. 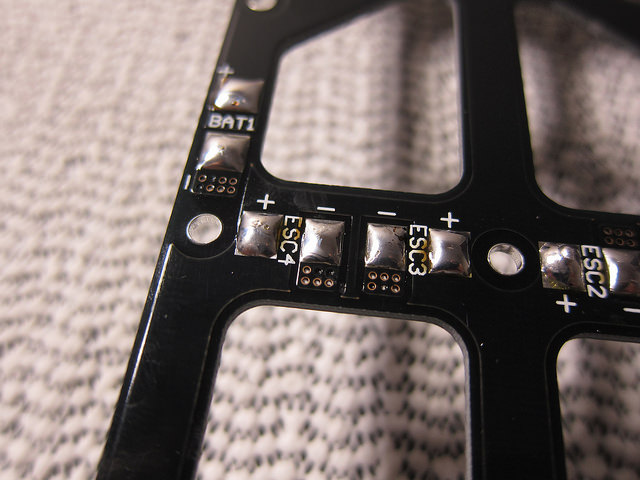 Once the ESCs were soldered on, it was time to add the motors. Now as mentioned earlier, two spin clockwise, two counter-clockwise. It would appear there’s no real way to tell which direction they’re gonna spin before soldering one of them up. This seems stoopid to me but hey, apparently that’s how it goes. Check out the second post for details. The picture below is the story so far… 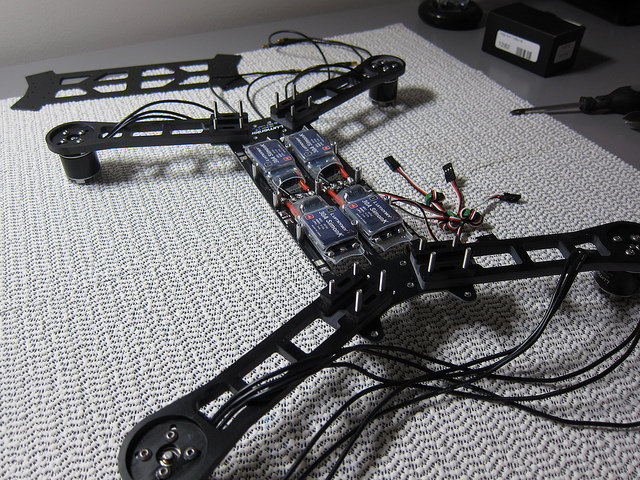 One thought on “Quadcopter Build – The Beginnings…”